I love a good steak, a nice juicy porterhouse or slice of prime rib, pink in the middle with a hint of red. Well seasoned with garlic, onion, and pepper, makes my mouth water just writing about it. Throw in some fried potatoes, a biscuit, and some green beans(with bacon and onions) and I’m in hog heaven, literally I’m afraid. 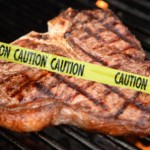 As good as it sounds and tastes, that’s a recipe for an early death.

Does this mean you have to give up red meat entirely? No, it just means it should be savored occasionally and not gorged upon daily.

Why do we love red meat so much if it’s unhealthy for us? For the answer we need to look to our primitive ancestors. What did they eat and how did they get it?

They ate small animals and birds that could be killed or disabled with a well thrown rock or a swing of a club. Fruits, grains, nuts, and berries they found while hunting for meat. Fish that could be caught by hand or spear in shallow water. Sometimes they would get lucky and find a larger animal with a broken leg or left overs from a large predator’s kill, a rare treat, time for a feast.

For thousands of years that was our diet, we evolved eating small animals, poultry, fish, nuts, fruit, and berries.

Over time they learned to cooperate, corner a large beast and kill it together. They didn’t know it would kill them early. When some one died they were just dead and life went on for the rest.

Am I going to stop eating red meat? Not yet, I’ll still enjoy a steak or a cheese burger at times. But not often or in large amounts when I do. Will I enjoy it as much knowing it is killing me slowly? Time will tell. For now moderation is the word.

Fortunately I like chicken, turkey, and many types of fish. Well prepared they can be just as satisfying as beef.

Am I going to die for a steak? As tasty as they are I think I’ll pass, how about you?

PAID ENDORSEMENT DISCLOSURE: In order for me to support my blogging activities, I may receive monetary compensation or other types of remuneration for my endorsement, recommendation, testimonial and/or link to any products or services from this blog.